Trinity Lutheran in Milwaukee WI was constructed in the 1800s as a place to worship God and come together as a community of believers living out their faith. Generations of people were baptised, worshipped, married, and had their funerals inside this storied structure – until yesterday when a fire broke out on the building’s roof and consumed most of the structure causing an estimated $17M damage. 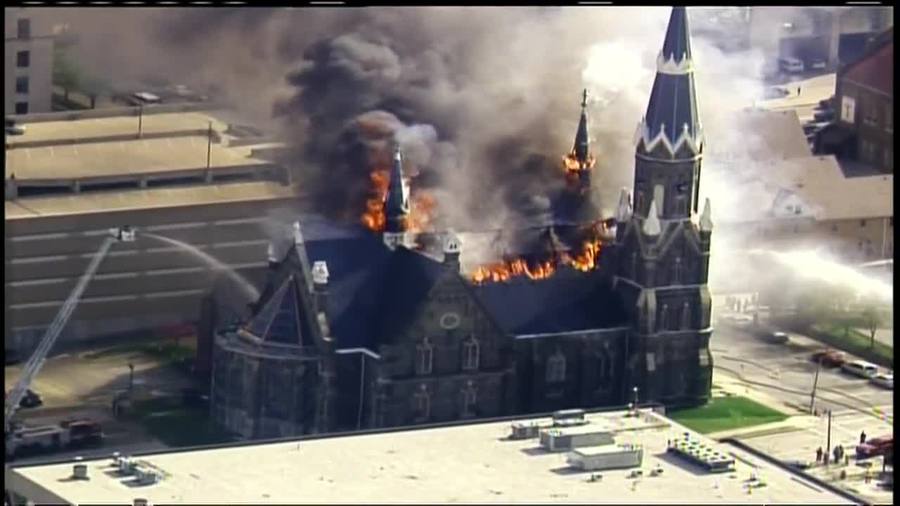 Jonah Burakowski – a mission executive with the LCMS South Wisconsin District – was watching firefighters work when he had an encounter which kept the focus on what the building was all about and on what the congregation needed to do next.

Today was a sad day for the people of Trinity Lutheran Church in downtown Milwaukee, WI. This afternoon a fire broke out and gutted the interior of this historic church built in 1878 (the Pabst Family provided some funding). Our office received a call shortly after 911 was dispatched and I arrived about 20 minutes later to find the building completely engulfed in flames. After talking with the Assistant Chief I was able to locate the recently retired Pastor Hofmann standing on the curb watching the firefighters valiantly fight the fire. Pr. Hofmann and I swapped some stories about the building and we talked about the future for the people of Trinity. During our afternoon and evening together I was struck by the crowd that had gathered, kept back by the police and fire fighters.

I heard gasps, saw tears, listened to stories about the historic church, and observed a group praying. But one encounter left me with a strong sense of hope. A women called out from the crowd and beckoned for me to come over. I walked over and she reached out and grabbed my arm pulling me close. She explained that she wasn’t a member of Trinity but that the presence of this church was important. Important because it was a place where people gathered to hear about Jesus and Milwaukee needed that. She was insistent that we rebuild – quickly. She then said, “Because Jesus will come soon and many still need to know about His love. Rebuild, sir, quickly.”

These are important words for any congregation. They have truth, “Because Jesus will come soon and many still need to know about His love.” Standing there watching the flames consume a historic building, I realized that the people who gathered on 9th Street were a very important part of Milwaukee. Not because they had a nice building but because they gathered there to know about His love. They received His grace, their sins were forgiven, and they returned to their neighborhoods sharing that love – impacting others in Milwaukee. I drove home with the words of that woman in my head.

Tomorrow the people of Trinity will meet to decide a course of action and direction. I have been invited to attend and be part of the discussion and I will remember those words, “Becasue Jesus will come soon and many still need to know about His love. Rebuild, sir, quickly.”