Among the various traumatic events that LCC endured during the Bugbee administration was when Concordia University-Edmonton first removed any mention of faith from its mission statement and then completely severed its ties to LCC.

“It’s all about inclusion. That’s the big issue. And we want to be an inclusive university.”

The university has a chapel and has required students to take a class in religion, philosophy or ethics, but Krispin said it had been operating as a public university for all intents and purposes. He also noted the school has a sizeable LGBTQ community.

“To have a religious connection was pretty off-putting to a lot of local students,” he said.

President Bugbee sang his “nobody told me” song to all that would listen and CUE was no longer a Lutheran university. In this manner a school that was founded in 1921 as Concordia College by the Lutheran Church–Missouri Synod to prepare young men for preaching and teaching in the Christian church became an “inclusive” secular University.

CUE’s departure from the LCC fold made it blindingly clear that the “gentlemen’s agreements” that had governed relations between LCC and it’s various related organizations for decades only worked when there was goodwill on both sides of the arrangement. But if – for example – a seminary decided to leave the LCC fold for some other home – there was nothing LCC could do about it. 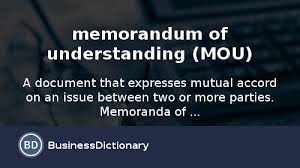 To address this issue LCC has begun drawing up a series of what’s called a “memorandum of understanding” or MoU between LCC and its related organizations.  From what I’ve read a MoU is one step above a gentleman’s agreement and one step below a contract. In the literature they’re generally considered an efficient way to formalize an agreement of intent between two or more organizations in a way that is generally not legally enforceable.

I’m not sure how an agreement that isn’t legally binding would prevent another CUE-style departure from happening – but suppose it could. Now assume a seminary that was a signatory to one of these MoUs decides to become Seminex II – then what?

But wait a second – aren’t lawsuits among believers verboten and “a sin”? And yet here we have LCC and its associated organizations drawing up written agreements that can only be enforced in a court of law.