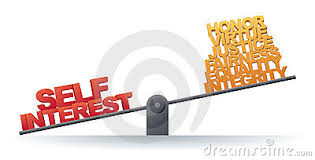 Investopedia defines a Conflict of Interest as

A conflict of interest in business normally refers to a situation in which an individual’s personal interests conflict with the professional interests owed to his employer or the company in which he is invested. … For example, all board members have fiduciary duties and a duty of loyalty to the corporations they oversee. If one of the board members chooses to take an action that benefits him at the detriment of the firm, he is harming the company with a conflict of interest.

You’ll regularly see examples of this in the financial press where an analyst will report on a stock and then at the end of the article make a statement as to whether they own it or plan to own it in the few days. If the analyst wrote the report in such a way that it would affect a stock’s price and then placed their trades to take advantage of that change, that would be in conflict with the interest of the report’s readers that are looking for sound, unbiased advice to base their decision-making on.

Another example of a conflict of interest would be when an “Company A” suffers a disaster. In the dustup that follows an official in “Company B” attempts to minimize what happened to “Company A” while leaving out their role in “Company A”  years before that may have contributed to the disaster coming about in the first place.

In LCC’s restructuring efforts we have a clear example of this latter kind of conflict of interest. The conflict took place in an article Mr Bill Ney wrote to support restructuring in his role as chair of the Commission on Constitutional Matters and Structure. In the article entitled FACTORS THAT LED TO A CALL FOR A MAJOR OVERHAUL OF THE LCC STRUCTURE Mr Ney argued that CEF’s collapse was caused by a series of decisions over many years by well-meaning people – in essence “We made a good-faith effort and it didn’t work out.”

What Mr Ney doesn’t mention is that he was a member of the CEF BOD during the time period in question and as such is one of the “well-meaning people” he’s talking about. This also means he has a significant personal interest in how people view CEF’s collapse – the more people that can be convinced that it’s demise was “just one of those things” as opposed to a scandalous breach of depositors’ trust the better his reputation will be in the end.

The conflict of interest for Mr Ney is that by minimizing what happened with CEF he would benefit with an improved reputation at the expense of church members that are relying on him for accurate and unbiased information about the intersection of CEF with the church restructuring effort. By retaining information about his role in CEF and not making his CEF involvement clear to the reader Mr Ney took advantage of knowledge he had that the readership probably didn’t have and so acquired a personal benefit to his reputation.

This leads to the natural question – if Mr Ney isn’t being fully transparent about his role in CEF / POP when arguing that POP was a good faith effort, what else has he been less than fully forthcoming about that now needs to be double-checked for bias and accuracy?

Continuing on, Mr Ney writes the following in his paper:

Those (ABC CEF’s) decisions were also made without input or direction or correction from the church as whole through Lutheran Church–Canada’s structure. Why? Because the structure did not allow Lutheran Church–Canada to intervene, or to effectively offer constructive criticism or warnings of potential risk in the on-going investment of significant CEF funds in the Prince of Peace project.

First – even if Synod couldn’t direct ABC to do anything it had lots of options for actions it could’ve taken. Synod could’ve monitored ABC’s finances closer and raised the alarm when it was clear that ABC District was getting into serious trouble. Synod could’ve obtained competent financial advice about the likelihood of Prince of Peace working out, or it could’ve asked ABC District for more details about how things were progressing and reported District to Synod in convention if District wasn’t forthcoming with details. That Synod didn’t perform these or similar actions makes for yet another broken record in Synod’s sad history.

Second – what Mr Ney is effectively arguing for is that changing the structure from one with federated Districts to one where Synod-runs-everything Mr Ney – and people like him – would’ve been prevented from doing (or failing to do) what he did – by the Synod Mr Ney is now a part of.

Detailed quotes and links to supporting documents follows this part of the article.

The April 19, 2017 of the Canadian Lutheran had an article Restructuring Update: Proposed New Bylaws of LCC written by Bill Ney from the CCMS. This article contained the following paragraph:

You will also find online a paper that I have written in response to countless questions as to “why” Lutheran Church-Canada is restructuring itself and why the CCMS has completed such a major restructuring rather than just “tweaking things a bit” as some have suggested. You may wish to read that paper also in connection with your reading of the new proposed Bylaws. Download the paper here.

The “paper here” referenced by Mr Ney is entitled FACTORS THAT LED TO A CALL FOR A MAJOR OVERHAUL OF THE LCC STRUCTURE, and in that paper Mr Ney makes the following comments about the CEF disaster:

It also became evident that the Alberta-British Columbia District Church Extension Fund was in trouble.

In fact, a number of unfortunate circumstances led to the ABC District applying for CCAA protection under the Courts in order to prevent further depositor losses. This resulted in the forced selling off of all District holdings, even including the District Office in Edmonton. It also meant the loss of all District workers at the District Office except three. And it resulted in court action requiring congregations with loans from the CEF to either find new financing and pay off their debt to the Church Extension Fund in full, or have their building foreclosed upon and sold.

I would like to note that, in my personal view, it was a series of decisions made over many years regarding the building of the complex at Prince of Peace Lutheran Church and School in Calgary that contributed in a major way to the collapse of the CEF which provided the bulk of the funding for that project. Those decisions were made by good, dedicated Christian people, fellow members of the body of Christ and of congregations of the ABC District, all of whom were committed to spreading the Word of God, with no intent whatsoever to have the project fail.

From project approval in 2001 to considering bankruptcy in 2004 isn’t that long.

Those decisions were also made without input or direction or correction from the church as whole through Lutheran Church–Canada’s structure. Why? Because the structure did not allow Lutheran Church–Canada to intervene, or to effectively offer constructive criticism or warnings of potential risk in the on-going investment of significant CEF funds in the Prince of Peace project.

What Mr Ney neglects to mention in this paper is that he joined the CEF BOD in Sept 2003 as its 3rd VP. Immediately after joining the CEF BOD he would’ve been up to his eyeballs in the Prince of Peace’s issues. His involvement would’ve also included a March 2004 BOD meeting where bankruptcy was considered as an option:

a. Abandon Ship
i. Debt $38M, Assets $22.5M, would lose $4M on Manor, loss on development of utilities $10M, had to find someone willing to buy utility losing $400K/year
ii. The loss would have been:
iii. $19.5M without any utility ramifications or lawsuits
iv. $29.5M if someone would buy the utility
v. a potential $53M if we couldn’t service the Village/Manor (Village units had guaranteed buyback), less what someone would have paid for the whole thing
b. Secure the Ship
i. Bail water (avert lawsuits)
ii. Plug holes (Village unsustainable, Manor 13 residents, utilities running at deficits)
iii. Secure hull (add capacity to share costs)

(This appears in the Task Force report under a March 2008 entry when the CEF BOD considered a similar set of options and was doing an 2004/2008 comparison of options and implications.).

In the October 2004 time frame another important discussion took place that he might’ve had a role in as well:

TF interview statements were that a guest at either this meeting or a later BOD meeting where the same was discussed voiced concern and said that the BOD should “come clean” about CEF’s exposure to POP.

Who was on the EC? According to the Task Force report:

According to the District Handbook, the EC is to have no more than five members: the DP, the BOD Chairman, and three other members of the BOD. Based on the documents available to the TF, it appears that the other three members of the EC over the last many years were typically the 3 VPs

If the EC was composed of the 3 VPs during the 2004 time frame, then Mr Ney would’ve been part of that discussion, and possibly part of the reason the CEF didn’t come clean about POP to the membership back in 2004.

Credits:
Conflict of interest image from an article on conflicts of interest written by FCPA Compliance and Ethics.

7 thoughts on “CEF, Restructuring, and an Undeclared Conflict of Interest”